Young mum and dad, first child. What an experience.

My pregnancy was going along normally, minimal morning sickness and each check-up had been great. Had a small bleed while at work, contacted the nurse about this and was informed if I was worried to pop to the Canberra hospital for a check-up, lucky I did.

I would say, know your body and if you feel unsure, get checked out, better to be safe. I was about to be sent home after having some checks and nothing coming up as a concern when the doctor decided to do an internal check just to be sure, well this showed that I was about 3cm dilated. Panic stations began from there, I was just 27weeks.

We were informed by specialists that if my baby boy came now there was a high chance we were going home without him. They admitted me and I was not to get out of bed. They started me on a cocktail of drugs to help him along. The second evening I was in the hospital I had a large bleed, I was moved into the birthing room and had specialists in and out all night. Luckily the bleed stopped and labour did not start.

I have to say the nurses at the hospital were amazing. I have to mention the male nurses, I had a male nurse that was 11 out of 10 for me, he was amazing at his job and very calming.

Within this time there wasn’t much information shared as they didn’t know what was going to happen. I was ok with this as it was a waiting game for us and the specialists. As things settled down, I was moved back into my room and again told not to move from that bed. I was on bed rest for that week.

My son decided on Father’s Day, a week after been admitted that he was ready to be born. It all happened very quickly. Felt some pain from the early morning, didn’t think much of it, told the nurse when she came in later that morning. She informed me I was in labour. From that moment, I was taken into the birthing room and within an hour my son was born. It was a flurry of activity, I think there was over a dozen people in the room, all the equipment was brought in and the registrar on that day delivered my baby. I was warned that he wouldn’t cry or make a sound, but to everyone’s amazement he decided to let out a huge cry when the sac was opened. He was born in the sac with the placenta coming out attached to it. Being in the sac is meant to be rare and in this case, it was also very beneficial as it stops any external germs. He was put onto a ventilator and stabilised in the room, before being wheeled into the NICU. No hugs or touches.

As a new mum and a new experience, I was in shock. They got me showered and dressed and then I was allowed to see my tiny boy. They don’t look like newborns on TV. He was this bright pink, see through skinned, hairy little skinny thing. He had tubes coming out of his bellybutton, a monitor on his foot and the ventilator attached to his face. He was kept on the ventilator for 2days and then put on the CPAP. Having almost a week of drugs helped to strengthen his lungs. 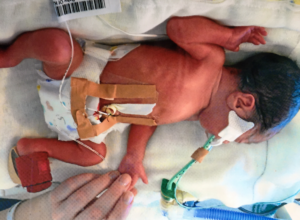 After a few days, I was allowed to have my first cuddle. It was a process to get him out of the crib with everything attached, again the nurses in the NICU, they were amazing. We hadn’t come up with a boy name as I was told at my 20 weeks scan I was having a girl, so after hours of going through the baby name book, we decided on Aydan, this meant ‘fiery one’. Very fitting.

He went from strength to strength as the weeks rolled by. Coming and going every day, this became the norm. Unfortunately, he picked up an infection of e coli weeks into it and went downhill very fast. The doctors were great, they got onto it very quickly. For us, this was a scary time, he was very unwell. Never again do I want to be taken into a room by a doctor and told to prepare for an unhappy outcome. The antibiotics worked and he kept getting stronger. There were many other babies needing support and they organised for him to be moved to the NICU at Calvary. He got a free ride in the ambulance. A few days into the new NICU we met the paediatrician that would continue to this day to look after him. Shortly after arriving at Calvary they noticed that he seemed a little lethargic and ordered some tests. He needed a blood transfusion. This again was organised quickly and he picked up almost immediately.

I wish to thank the amazing people who donate blood and who donated the blood that saved my little boy. I am a blood donor and it is amazing when you get to see first-hand the help it provides.

We were lucky with Aydan, he spent 67 days in the NICU and had only 2 medical issues. 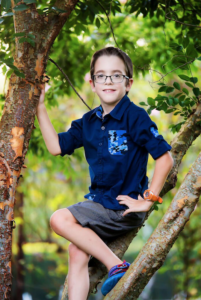 My experience was minor compared to the lives of the other mothers and their babies who were in the NICU with us. The NICU and organisations such as this foundation are vital in helping these little babies turn into wonderful children.